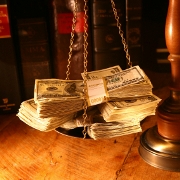 Anyone contemplating working in the criminal justice field has a natural interest in which jobs pay well and which do not.  That natural curiosity has to be tempered with the practical reality that the best paying criminal justice jobs may not be the fastest growing jobs and, for obvious reasons, may be relatively difficult to get (there’s more competition because everyone wants to be well paid).

There is also the problem of defining what a “criminal justice” job actually is, because a two-year or four-year degree can be followed up by advanced degrees qualifying you for jobs that the CJ degree alone would not.  For example, a CJ graduate who continues on to law school, or even medical school, would qualify for jobs that are higher paying, but not available to people whose only degree is in criminal justice.

In reading the rest of this article, also keep in mind that there tends to be geographic variation in pay, with higher pay generally available in locations with higher costs of living.

Leaving aside those jobs that require advanced degrees in other fields (lawyers, judges, etc.), the Bureau of Labor Statistics salary information indicates that the following direct criminal justice jobs—those reasonably possible to obtain with a degree in criminal justice—have the highest median annual salaries (listed highest salary to lowest):

Criminal justice graduates who continue their education, or find a way to cross from one career path to another, may find themselves working in the true “legal” realm.  The Bureau of Labor Statistics salary information indicates that the following legal jobs have the highest median annual salaries (listed highest salary to lowest):

Everyone is interested in money, of course, but it also pays to take a pretty close look at the overall “value” of a job to you. This includes monetary compensation, but also extends to such things as: