What Exactly Is Forensics?

By its simplest definition, forensics refers to the application of scientific techniques and principles to the law. The term “forensic” is derived from the Latin word forensis, which means public or pertaining to a forum. While forensics has only recently become a high-profile field, the practice of forensic principles actually dates back to ancient times. For instance, it’s believed that the first recorded autopsy was performed sometime around 44 BC, following the death of Julius Caesar. 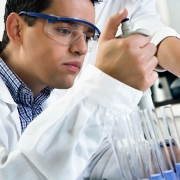 Over the past decade, television shows such as “CSI,” “Bones,” and “Criminal Minds” have generated a significant amount of interest in criminal investigations, particularly with regard to the forensic aspects of how crimes are solved. These shows offer a unique, albeit slightly glamorized, look at the different phases of the investigation process, from the collection of evidence to determining the cause of death. While these and similar programs focus primarily on the physical and psychological science behind crime-solving, they don’t always reflect the reality of what forensic work involves.

The different types of forensic studies can be expansive. We wanted to breakdown a few of the key ones that you might be considering as a degree program.

In today’s society, it is more common than ever for legal evidence to be found on electronic devices such as cell phones, computers, and even digital media players. Sometimes criminals may store evidence in the form of text messages, emails, or even previously visited websites.

Specialists in computer forensics are often tasked with investigating and retrieving this information to be used as evidence in the event that charges are brought forward.

Computer forensics is a descendant of the field of forensics which provides education and experience in specialty areas that include electronic devices. Those that are interested in being a part of this field can blend their knowledge of forensics as a whole with the field of technology in an effort to provide priceless information to law enforcement during an official investigation.

Sometimes the human body can tell investigators more about a crime than the people involved. Forensic toxicology is an interesting branch of forensics that involves chemistry, biology, and laboratory analysis as a means for finding answers.

Drug testing, search for poisonous materials, and sample analysis are just a few of the many factors that can be present within everyday work in this field. Upcoming professionals that have an investigative mindset and wish to mesh careers in science and the justice system may find this career field to be exactly what they are looking for.

Most professionals in this field are licensed dentists that wish to further their knowledge into the field of forensics, but there are sub-fields that do not require any previous dental experience.

Using dental science to identify victims or pin down causes of death can be a helpful way to contribute to overall forensic evaluations.

Those interested in this field may have the opportunity to learn more about how dental science can be an effective way of identifying a person’s identity when all other options are unavailable.

Similar to computer forensics, digital forensics is a branch of forensic science that uses investigative techniques to gather stored data from digital devices. This branch can include cell phones, digital storage devices, computers, and other technological items used by individuals.

In the event that a crime has been committed, digital forensic specialists step in to review items on storage devices, analyze computer search history, emails, and even money transfers to gather information needed to prosecute or defend people involved. If you have an interest in computer technology and want to use your knowledge and skills to help provide justice, this is a area of expertise to become involved.

Today, forensics encompasses a wide range of disciplines within the criminal justice system. Forensics has become synonymous with forensic science and there are numerous subdivisions that fall under this broad umbrella.

Criminal forensic specialists may work in a number of different settings, including scientific laboratories, hospitals, correctional facilities, state and federal law enforcement agencies, and other government organizations. You can view all forensic science degrees here, view featured forensic science programs below, or read on for some of the more popular career paths in the forensic sciences.

Below are some featured schools with online forensics or related programs that are currently accepting applications. Simply click the checkboxes next the programs you are most interested in and enter some simple information to get in contact with them.

Find Criminal Justice and Forensic Science Programs in Your State:

When a death occurs, it may be up to the forensic pathologist to determine how and why the victim died. Pathologists are charged with performing autopsies and using their findings to pinpoint the cause and manner of death. Autopsies may be performed in cases where foul play is suspected or when the death is unusual or sudden. In addition to performing an autopsy, a forensic pathologist may also travel outside the lab to inspect the crime scene. Forensic pathologists typically work closely with other forensic science specialists, such as forensic odontologists, who use dental records to identify human remains, or forensic toxicologists, who analyze blood and tissue samples to detect the presence of drugs, alcohol, or other chemicals.

Criminalistics refers to the scientific analysis of evidence collected from the crime scene. Criminalists analyze physical evidence in the crime lab, including hairs, fibers, gunshot residue, arson accelerants, and body fluids such as blood or saliva (for DNA testing). Criminalists have strong science backgrounds, usually in chemistry, biology, or related subjects. They must be familiar with a broad array of instrumentation and scientific techniques, and be able to present and explain complicated scientific evidence to a jury.

Forensic nursing is an emerging field in forensic sciences that acts as a bridge between the medical profession and the criminal justice system. Forensic nurses are frequently called on to assist in investigations involving the victims or perpetrators of sexual abuse, domestic assault, child abuse, or other types of trauma. They’re responsible for collecting blood and hair samples, DNA, and other evidence. They may also be asked to provide testimony at a criminal trial or consult with law enforcement to assist in an investigation.

Forensic science is more than just what you see on television. There may be dozens of people who are involved in a criminal investigation and there’s a significant need for individuals with specialized skills and training. With so many sub-disciplines to choose from, the field of forensic science offers a virtually limitless number of career paths to students who are interested in the mechanics of crime-solving.